The British airways lounge at Amsterdam Airport has moved. As of 17th December 2014 it is in a new location, which rather unfortunately requires a long walk to get there. If you fly Cathay Pacific Business class, or any other Oneworld carrier but with Sapphire status, then you will also be affected by the move. 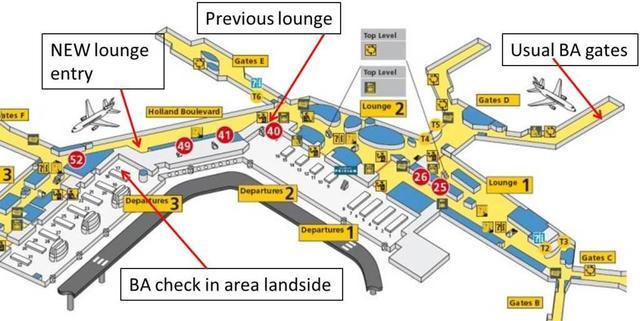 What the map doesn't show is that the new lounge is actually on the roof of all that you see, and that the way there has a long outdoors section. This temporary route will remain in place until April 2015, when the lift which connects the lounge to the rest of the terminal will be in place.

Here's my walk, shown in real time but at a very brisk pace:

And a video inside the lounge: The new lounge is far superior to the old one, with improved brightness, views and full height windows across one side. The food and drinks selection remains disappointingly sparse. The interior décor is much more like the Galleries concept which BA would have hoped for. I'm sure the photoshoot they did is far more flattering than my efforts. Photos here.

My only thoughts are that the architects behind the one terminal concept of Schiphol have a nice philosophy, but it often feels like it would be quicker to walk to London instead.